Kama City is one of the 3 largest urban structures of the grid. It is mainland (Linden-owned), modern and 'Adult' ranked. It has the most expensive land on the grid. It is located in Zindra continent.

Kama City was the first land built in Zindra. Its borders and shapes were visible and well defined. Many geographic places were named, like in the old times when the first two continents were created. History/Adult content shows some historical data. Additional information can be found on Zindra page. 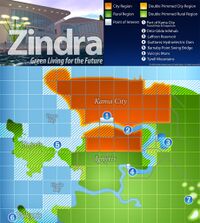 Kama City is placed in North-West of Zindra, on a large plain. It is surrounded by navigable sea water in North and West. Close, in North, there are the adult sandboxes. A river comes from East and flows into the ocean. It has a large island in its middle, with a dam on each side (see Dams for technical data). The river is also navigable. It separates the city in 3 distinct parts: North, South and Suburbs.

North Kama or the central part of the city is the part with most impressive urban constructions. It is a flat plain, a perfect plain, where terraforming is not allowed. It has a double transportation system, made of a monorail (see Monorails) and a road network. This part offers the most expensive land for sale, that sometimes renting land might be much cheaper. The heart of the city is the sim Kama Center with a large square, a water basin and a high monument. For any traveler, this should be the first orientation point. Another place full of interest is Mosh sim, with its giant hall, a huge glass building that is both a welcome area and a monorail station. Many buildings are modern, while other constructions are impressive and built with massive stones. Almost everywhere you can feel the air of a real city.

South Kama is separated from North Kama by water. It is isolated on the river island. The dams connect it to North Kama and in South to the Suburbs. The dam in north (Oritz) is also an infohub and a safe hub. It is also a large plain, but not a perfect plain. Small slopes can be observed from place to place. First maps showed that only North part of the island is urban land. Currently, things are changing. Even if the infrastructure is not developed as much as in North, the construction of new urban buildings made this part to be no longer a rural area. Glass bildings can be found in alternance with other constructions.

Suburbs is not an official part of the city, but, just like Nova Albilon, Shemerville or Luna, that are connected economically to Bay City, the same can be said about the land South to the river side. Its development is slowed down by the lack of infrastructure. The land is also a plain here, but not as smooth as in South Kama. There are small terraces and remnants from terraforming. In this part, land is much cheaper then in North.

North Kama has its well-known monorail system, one of the most advanced transportation vehicles on the grid. Unfortunately, it moves too fast and many avatars simply don't survive the sim crossings.

The road system is made with an inovative design. First of all, roads are bilt on parcel borders. This means that, if you cross the road, you get into another sim. To avoid unwanted sim crossings, from place to place there are obstacles on the road. And at every intersection, there is light semnalisation, with an unconventional design, made more for decorative purposes. nobody will ever charge you if you cross on red. All roads are illuminated from ground level. Their luminosity is very useful on night time.

In North Kama, there are many paths between buildings or along the monorail line. In South, roads sometimes end and are continued with passable parcels of Protected Land. These parcels are easy to recognise. They are almost always covered with trees found only in Zindra.

Navigation is a way of travel in the area. There are rezz zones in north (on the ocean shore) and in South, on the river.River navigation is limited by the dams.

From all urban places, Kama City is the most populated of all. Protected Land is more rare then in Bay City or Nautilus City, but still present. Abandoned Land is rare. Also, Land With Restricted Access is rare.

Where is all the fun?

Kama City can be called Lust City or not? Yes, it is an 'adult' land and the capital city of Zindra, but still you won't see here many residents completely naked. It is enough to travel a bit or to take a clear look on the world map and you will find many interesting locations. In adult land, sex is allowed in public, nudity is not a problem and fun can be found almost anywhere if you search a bit.