A monorail is a special type of railway. The rail has a complete different shape and structure and is always suspended in the air. The vehicles driving on a monorail are small, modern and build using levitation technonogy or they are suspended on the rail above them.

Currently, there are 3 classic monorails and one hybrid monorail - tram system.

This is a complex multisim monorail that has multiple stations and connects many sims in North Kama City, Zindra. It is not made for personal vehicles. Its structure is complex. It connects 21 sims and has 18 stations. These stations are small, built at 10 meters above ground and connected to ground with stairs. Stations don't have multiple lines.

The most important station is in Mosh sim, a glass building with ultramodern shape. Also, one of the most inetersting part of the track is a sector in North, where monorail vehicles drive under water.

Every resident can access the monorail at a station. There, on touch, a vehicle (named car) will be rezzed on command. The vehicle is small, two-seated, modern and has a higher speed then any train. The driver has some options to control the direction, but it needs a few training for this. The main problem is that the vehicle has an incredible speed. The buildings nearby don't have time to rezz completely. Sim crossings are not always done without problems. 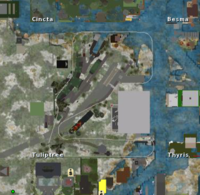 Construction of Tuliptree Monorail is one of the newest pleasant achivements for the railway community. This single-sim monorail encircles Tuliptree railway station. It has multiple stops and speed is acceptable. It is a new generation railway transportation system.

Huffman Microcontinent holds its own monorail inside a sim.

Sharp Continent is the remaining of the old teen grid. It has its own city. Currently, the urban area has not a well-accepted name. Various names exist, like Little Bay City, Sharp City or TSL City.

What is interesting in this little urban area is the presence of a transportation system. It has a central tram, with a track that looks like Nova Albilon tram in Luna - Dore suburbs. (see Bay City Railway & Trams for more info). A second way of transportation is with the help of suspended vehicles, with a modern and impressive design.

Sharp City is the most populated place of Sharp Continent and also the city with highest number of sky-scrappers. One reason for this high population density must be the presence of a high-developed infrastructure, that includes roads, tram/monorails and also navigable channels.

There are currently two vehicles working: one on the tram line and one on the monorail line. Both vehicles are working after a schedule. Another advantage is that both are connected in two points. This is by far more effective then the Bay City system, where the two trm lines are not connected and only Nova Albilon tram is working well.

The Field Studies Centre At Browness

This is a monorail located in Browness sim, Linden Village, North-East of Sansara, surrounding an active Volcano.

These are at the border between a railway and a monorail: