NOTE: THIS RAILWAY IS UNDER CONSTRUCTION. THE ARTICLE MIGHT BE OUT OF DATE FOR SMALL PERIODS OF TIME.

rapidER is the newest multisim railway (as far as July 2014). It is located in North - East of Sansara, in East River Community. It is the most modern rail in Sansara.

The need for railways in Sansara is very old, probably since the beginning of this continent. Just like the other attempts in other parts of the continent (GSLR in North West, ONSR in South West and SJRR in South East), a rail initiative was needed in the North East. The railway was built July 2014 by initiative of Elisha Paklena, one of the founders of the community. As of August 2014 the railway is still under development. 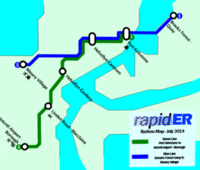 The railway has 7 stations (two of them are common for both lines) and visits 9 sims. Automated Transportation is present. Not only this, but it is connected with two airports and a heliport. Road access is at Macclaine station and water access is also possible from the many docks along the coast.

In some parts, the trains need to teleport to get over some parcels.

This railway is simple, except for a small part that looks double (where in fact both branches are one near the other). There are two types of tracks. Some of them are railway tracks, not as wide as Heterocera rails, with sculpted wooden slippers. A similar design is used for Second Norway Railway, used mainly in rural places. The other tracks are made of iron, similar with those found on Calleta Monorail, with an urban design and many times used inside tunnels.

An important fact is that railway is split and trains need to teleport or to move underground. Many stations are underground or inside larger structures (like airports), so it is difficult to find them. In other places (like Mowry station and much of the blue line), stations are at high altitude (Mowry is at 547 meters). All these are done to accolodate to land restrictions and needs for the community. The blue line is highly elevated, but still it is a tunnel, so that you think you are in a subway, but in fact you are high in the sky.

Rails are not compatible with classic Heterocera trains, because their 'Guide' has other names. In some places, auto-return time is set at a too small value for many trains.

The trains working on this railway are modern, very fast and use the same type of trains used by Second Norway Railway. Because the railway is under construction, train schedule might suffer important changes or they might be limited for only a part of their branches. Most probably, in the end, there will be an automated service along all lines.

As proven in past, transportation ways have a boost effect on local economy. It is proven that in Color Sims places with access to GSLR are the most visited and in Snowlands Subcontinent the ONSR stopped land from being depopulated. Even the tiny SJRR had a strong influence in the area it transits. It is expected that this new railway will have a strong positive impact on East River Community and surrounding areas.