The Sharp Continent is what is now left from the Teen Grid ([1] - see this related article for more information). Since it has more then 30 regions, it deserves the name Continent. It is mainland.

Originally, Second Life was only for adults 18 and over. From 2005, teens 13-17 were allowed access only to a limited part of the grid. An underage user could not see the rest of the grid and an adult could not see Teen Second Life. This included the continent and a handful of private islands. A new policy for teen residents was announced near the end of 2010 [2], and the continent united with the main grid on January 21, 2011 [3].

After this, population continued to decrease faster then in other parts of the grid. The same happened to the structures found on the map in Sharp Sea - Eastern Ocean. In autumn 2013, they reduced to 1/3 of their initial size, while in December 2013, they were reducing to 1/4 (see Sharp South Sim Cluster and A 195 Sim Group. Currently (December 2013) more than half of this continent is covered by Abandoned Land and many of the parcels that were for sale in August 2013 are now abandoned. If the same tendency continues, in spring 2014 the continent might become the most unpopulated of all continents, even more deserted then Gaeta 1. The reasons for this are unknown. Several possible explanations exist: Firstly, the teen population grew up and moved to other locations. Secondly, currently there are many teen estates, covering more than 4 times the size that teen estates had in 2010. Third, this continent by its heritage is made up entirely of General rated regions, restricting the variety of allowed content.

The name is not official, but some new residents that came after the Teen Grid united with the Main Grid simply call it "the sharp piece of land." Another name, common with older Resident account, is to refer it as the Teen Second Life Continent (aka "TSL continent"). Jack Linden, former Executive Director of Product with Linden Lab, referred to it merely as the "Gridde O' Teens" on a map in the Linden Estate Services region.

The continent is located somewhere between Satori and Premium 1 (see Premium Continents for more info). It is a long group of regions, set from North-West to South-East. From one end to the opposite end, you need to pass through 34 regions, however the continent is only 1 to 4 regions wide.

The geography of this continent is based on that of Sansara. In the west, there is a city formed of 5 regions (Hyperion, Loki, Ni, Hippoden and Pullman). They also have a trolley that is similar to the Nova Albion trolley (the first of Second Life's "city projects" located to the east of Bay City in Sansara). This city is followed by a group of regions that look like the priordial regions around Da Boom in sansara. The next sector to East look like the inner seas, rivers and islands of Sansara, with many roads and waterways and even two Dams. Close to the center of this continent, in Snicket region, there is a crater creted by a meteorite impact. The only other mainland crater is located in Linden Estate Microcontinent. The most Eastern sector is covered with ice, like the snowlands of Sansara. The shores of this continent are not completely finished.

The road network is split in two unconnected sectors: the central sector and the west sector in the city. Accessibility is easy, by road, by boat or by foot. There are not many ban lines, so a person can travel easy from one end to the opposite one.

An interesting aspect is that there is not much land for sale. Some parcels have land prices very high. Part of the land is protected land. 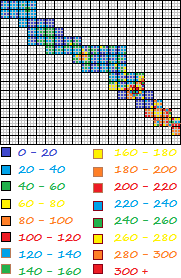 The continent has a lot of untold surprises, that have been discovered now. For example, it hosts the second high mountain of the grid, of 350 meters high, inside region Svecia.

The west part of the continent, including the city, has low altitudes. The central part can be divided in two: a western part with lower altitudes, similar to old Sansara and an east sector, with unexpected high altitudes, something never seen on the grid. Here is the highest mountain of the continent, with 350 meters, while the highest mountain of the entire grid is in Heterocera and has 364 meters at Castle Bella. This is higher then the 315 meters high mountain in Tethis, Sansara and by far more high then any other continent.

Another feature that is unique to the continent is the extreme declivity. The highest mountains are so close to water, that the highest mountain is only 130 meters away. That corresponds to a declivity of about 70%. This is by far the highest altitude difference in a single region and also by far the highest mountain measured from base to top in Second Life! The mountain is doubled by another one, very high, on the opposite side of the river in Svecia. This makes the river of svecia the deepest canyon, much deeper then any other one. To South, the region Tenshi is a shore region. This also marks a record, since the Svecia - Tenshi is the highest oceanic shore, much higher then any other shore. The only problem here is that flying is not allowed, so it is a real adventure to climb to the top of these mountains.

The snowlands have both very high and classic altitudes.

Since the Continent has such high altitudes, a special article is required about Mountains Of Sharp Continent.

Regions with no water: 3

The following numbers are the local Coordinates, like they can be seen on Gridsurvey [4] for the continent and its subdivisions. The data format is longitude (min-max) / latitude (min-max).

The continent has its own road networks and a monorail (see Monorails. The road network is split into unconnected pieces. However, the high amount of abandoned land is an alternative way to pass over obstacles. Yava Script Pods can be seen along these roads.

The continent has a complex road system and navigable waters. In the west, there is a trolley. This is the best place for walking, horse riding and traveling. There are large surfaces of abandoned land and Protected Land. Since the continent has the second highest mountains after Heterocera (see Mountains Of Heterocera), it can become a great tourist destination.