Pallas sim is CLOSED - Jan 2011. It was owned by Lauritz Larsson Architecture 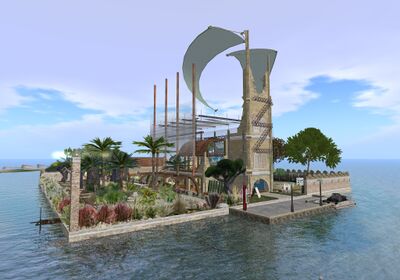 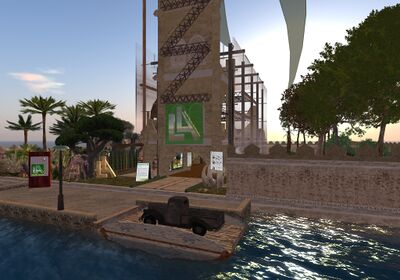 The ruins in sunset, the small supply ferry just docked

The central island called Pallas, carries a restoration site of an old, lutheran abbey ruin, where the Lauritz Larsson Architecture Bureau has its headquarters now - that is where the members of Lauritz Larsson Architecture show some of their skills and buyable creations. They do mainly custom projects from small parcels to whole continents but a few of the creations are also available in the vendors, though rather the smaller objects like housings, deco and plants. Some of the larger projects were the Costa Rica continent Waterfalls, the Yalta sims, the ER Waterworlds or the Mission Projects like Mission Beach, Mission Sea Promenade, Mission-Super-Mare...

The abbey itself was founded ages ago as a lutheran monkhouse on an artificial island. Originally surrounded by huge defense walls against pirates and other enemies, the huge outer walls are dismantled now, only a part of the smaller inner walls remained, also most of the vegetable gardens and adjoining buildings are gone. The scriptorium was still almost intact, while the refectory is to be restored. The dormitory and barns will not be restored. Some decent green, fountains and plant beds can be found here nowadays. Walkways lead the visitor around the place. A small dock allows to park boats here temporarily. A free scuba gear dispenser is placed at the dock to explore the underwater area. The whole island is carefully designed to appear rather as a relaxation spot inviting to rest and chill.

The second island in the southwest is named Karatikus. It has semi-private residential character. As long as you dont see any banlines, it is open to public. It has a little beach and some rocks in the backyard. A small fall creates a stream that heads for the ocean. An old ferry stopping randomly at the little dock connects the island with the abbey. (7S) Fishing can be done here, also scuba diving is possible. A free dispenser can be found at the dockingplace of the Abbey Island.. A deserted naval surveillance installation is now used as residential / hangout spot.

The last island, located in the northeast is named Hephaestus. Some relicts from old wars can be found here. A foghorn warns the ships to come close... old ammo and mines might be still active and dangerous... a shipwreck in the southeast is the result of too carefree captain... bad luck for him.

back to Gay Archipelago