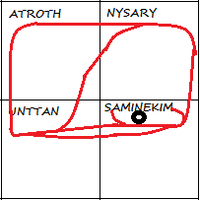 A176 is a Sim Group inside Grid Sector J4, Southern Ocean, the only land in the Premium Sea. It contains the Premium railway, and a set of Premium gift vendors.

The railway follows the basic of any classic rail found in Heterocera. It is the shortest multisim railway. It covers only 4 sims that form a square: Saminekim, Nysary, Atroth and Unttan.

It has a central station in Saminekim, with two lines. From that station, two short lines end after a few meters. The station is the only rezz zone. If you want to edit a train there, it is not a good idea since after 10 minutes objects will be returned back. From Saminekim to Unttan, the railway is double.

The central railway forms a square and crosses all 4 sims. There is also a small branch, rusted and without a bridge. Don't worry, trains don't fall, even if there is no bridge -- you will just 'jump' over the hole. There is no automated train moving on the rails. Not many visitors can be seen here, so it is a nice and quiet place to drive your trains.

A few 'dirt' roadways, and simple wooden bridges, are also seen in the area.

The terrain textures, and sometimes the trees, are adjusted to match the Northern Hemisphere seasons.

As of 5 October 2015, there is a catenary line over the entire railway, except for the "abandoned" line segment.