Here is a proposed organizational layout of the VAGs: 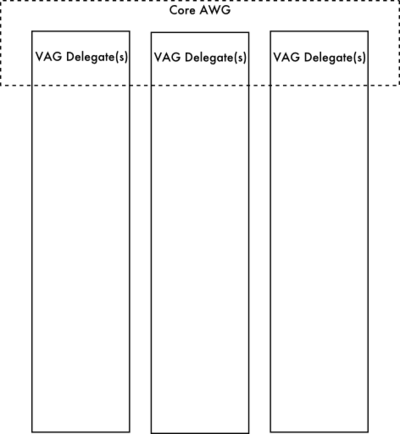 Here is a conceptual layout of the VAGs: 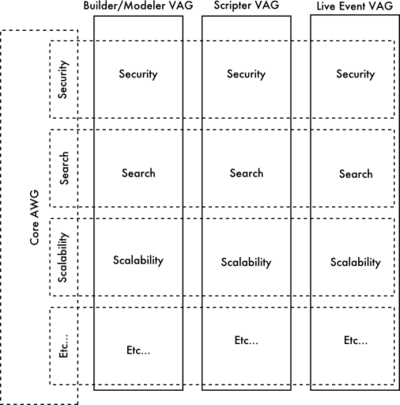 So you'll have Event Scalability sub-VAG, Event Security sub-VAG, Event Physics Sub-VAG... Since event people have concerns in all those areas. My proposal is to just have "Events VAG", and they will touch on all the issues. Gigs Taggart 22:28, 18 October 2007 (PDT)

Note these groups are just examples of what a group might be. Notice that high level architectural issues are not VAGs, rather, all VAGs will consider high level architectural issues from their unique viewpoints. For example, "Security" is not a viewpoint, so a "Security" VAG would make no sense. All viewpoints will consider security in their own unique way, and provide input.

This isn't "Everyone considers everything", it's "Everyone considers all the parts of the architecture that are relevant to their stake, from the point of view of that stakeholder." It's a subtle but important difference. Gigs Taggart 22:37, 18 October 2007 (PDT)

Well, in my vision, you'd have to decide what level of granularity is appropriate there. The VAGs aren't going to be without internal differences of viewpoint, but in the end the stake should be the same: You all want to do "foo", where "foo" is whatever the VAG is about. You'll still have to consider all the use cases to accomplish "foo" that you are aware of, even if no one in the group does it ("it" being that particular use case to accomplish "foo") personally. Gigs Taggart 22:31, 18 October 2007 (PDT)

Yes, I think I agree with that. So in my example above FOO = "more easily creating better geometry". So, horizontal/vertical model is not quite right to me (sorry I'm slow Morgaine :-) There are certainly some VAG that do fit this and I agree that VAG should not purposely try to mirror the architecture. But I'm starting to feel the VAGs should look a bit more like this: 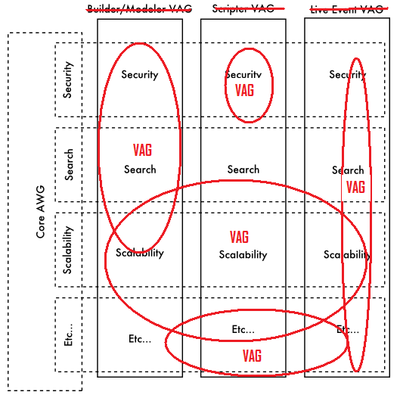 Viewpoints: the substance behind the concept

If you take a few steps back from our metadiscussion above and look at what's being happily accepted from the very relaxed guidelines of IEEE-1471 and what's being omitted, the picture that emerges is a curious one. It reminds me of Feynman's story about "cargo cult science", in which the protagonists accept the form but don't understand the function that underpins it.

IEEE-1471 deals with architectural design of systems, yet it is based on the concept of viewpoints, which at first glance have nothing at all to do with architecture --- mighty peculiar! It doesn't require a lot of reading to discover why this is so though: it's because you can't really define architecture in any other way, no matter how hard you try, and no matter how convinced you are that you are doing it objectively and independent of viewpoints. You are satisfying only one viewpoint --- your own, or multiple viewpoints of your own, or of your own interest group.

Implicit in that concept is that you can't subdivide up architecture in a single way a priori and then dish out pieces of it to various working viewpoint groups. If you could make such a subdivision then that would imply that your unique breakdown already models architecture to first order, either functionally or structurally, in which case viewpoints aren't being used in their IEEE-1471 role of delivering architectural descriptions at all, because it's predetermined.

Accepting only the process of viewpoints really isn't very helpful. Viewpoints aren't really a process in IEEE-1471 at all, just a consequence of understanding that there can be no architectural description independent of them. What this means is that accepting viewpoints yet still believing in some kind of overriding decomposition is completely missing the core point of IEEE-1471. You might as well have no explicit viewpoints at all.

Viewpoint groups define the breakdown that is most appropriate to them. That's their purpose.
--Morgaine Dinova 08:19, 19 October 2007 (PDT)

Could you elaborate on the reason for the name change? I see the comment "to keep focus of the right direction, keep in mind about COST, and avoid bureaucracy" but don't quite understand how the name change accomplishes this. --Burhop Piccard 17:56, 11 October 2007 (PDT)

It implies a meaning from recent events, which are significant; however, the name change alone is not a complete solution. It is a minimal change to influence the discussion. The serious point being task focused and cost effective. The Tao Of Linden already points out the need to not be political. Zero also reiterated about the need to have no ego in code. The emphasis of "groups" and "core AWG" can easily be a politicized medium, and we want to avoid that. We need to stay a team altogether. In AWG chat, we found the intention is not to actually form (sub)groups, but the intent is more to (to quote the article), "Document rationale for architectural decisions" and "Work with the core goals to document views and requirements that conflict or are inconsistent." It is inconsistent and political to form more subgroups to do what the AWG already does. JIRA is an example of a better medium then subgroups -- create tasks and subtasks. Again, COST is not something I've seen discussed. COST is an influence here. In fact, a good example of a use case is the recent event between Europe and non-EU currency transactions. Hmm, what's a good way to say it with too many details... look at ArchWG_Mtg_1_Slides and create an analogy of "mainland" to the U.S. -- and remember that the pipe between US and EU is limited. Then you'll get the notion that the "V.A.G." (as previous defined) IS the AWG. The question becomes, why change it from "A.W.G" to "V.A.G."? Dzonatas Sol 19:07, 11 October 2007 (PDT)

To be clear, we ARE talking about groups here. We have groups of stakeholders with their own concerns. These aren't tasks, they are groups.

You all mention "politicization" ... Groups of people will want certain things, depending on what their stake is. Trying to deny that is just going to lead to a lot of useless bickering. This is supposed to be a framework for various groups to advocate their viewpoint and to ensure that their requirements are met as best we can.

It's supposed to be slightly adversarial, in the same sense that a prosecuting attorney and a defense attorney are adversarial. It doesn't mean they can't go have dinner together after the trial, or even switch roles in the next trial. We are all working toward the same end, but that doesn't mean we all need to advocate the same viewpoints.

Membership in one of these groups isn't exclusive, and there's no reason one person can't be a member of more than one group, or a member of one of these groups and also of the core team. In that sense it isn't polarizing, since there's nothing preventing participation anywhere that someone wants to participate. It's merely a construct to provide a way of thinking about stakeholder groups, their needs, and integrate them into the design.

I'm renaming this back to groups.

These groups should have their own meetings, and produce their own output. This allows for a finer grained focus than one huge group with many stakeholders all trying to pull the group in their own direction. I expect most of these subgroups to be from 3-7 people. This is an ideal size for actually getting things accomplished. Larger groups are REALLY BAD at getting anything done. Gigs Taggart 11:58, 12 October 2007 (PDT)

As you say, it can be seen as slightly adversarial, but I put quite a different slant on it because of my past history: engineering requirements are ALWAYS in conflict with each other, and therefore require cooperative assessment and calm, professional tradeoffs to be made. These viewpoint groups allow us to approach that structurally, but only if the structure is flat and the playing field level. One issue illustrates this: we've already seen some people express that their concerns and work are so "core" that they don't even need to describe a viewpoint because "core" overrides everything else. That approach does not create an atmosphere of collaboration, which is why I want everyone to buy into your idea rather than consider themselves above it. --Morgaine Dinova 07:58, 13 October 2007 (PDT)
Nothing is above the VAGs. The VAGs will review the work output of the core group in every way. If the core group is proposing something that a particular VAG can come up with a coherent critique on, then that should be reexamined. Gigs Taggart 22:57, 13 October 2007 (PDT)

More on groups vs tasks

"Eat your own dog food"

I can already see the politics started with "groups" and this is one area we don't need those kind of politics. Even as Rob suggested that LL does not have the means to facilitate. If you want groups Gigs, I suggest you document this more -- "eat your own dog food." I believe there is enough on the front article to know what to include when you write your viewpoint. At this time it is not complete enough, and it be better to have more to understand each other rather than wheel war about it. I think I've written more on this discussion than what you wrote in the article, and maybe that should say something in itself, especially if I continued into further details. I'm looking for your details of your viewpoint. What I changed into "tasks" is the attempt to use modern technology that is already provided to achieve the same goal without the politics, but you don't see that. Dzonatas Sol 07:44, 13 October 2007 (PDT)

Viewpoints and the inter-VAG reference graph

In working on various VAGs, I've noticed that an interesting inter-VAG inheritance/composition/reference graph is emerging:

One of the interests of the Quality Assurance VAG will be to determine the degree of conformance of any aspect of system architecture with the concerns expressed in viewpoints. With a bit of luck we can automate the VAG-walking to yield a nice reference graph as a byproduct of concern traceability checking. That could be visually interesting. :-)
--Morgaine Dinova 08:22, 20 October 2007 (PDT)

To put it another way, the fact that there is a wiki reference between two VAGs adds semantic information to the normal web linkage here, and we can use that fact to focus attention on areas that are critical to many viewpoints and which affect the most users. This could be powerful.
--Morgaine Dinova 08:52, 20 October 2007 (PDT)

Why don't we introduce a new concept then, the "cross-cutting issue". A cross-cutting issue would be off limits in terms of creating an explicit VAG for it, but every VAG would be required to examine their output's impact on each cross cutting issue? Gigs Taggart 18:58, 20 October 2007 (PDT)

1) Dzonatas Sol is not even a member of this VAG.
2) This VAG is a core VAG which factors out tools used in several other AWG VAGs, underpins the measurements and results used in those VAGs, and which generates the ADVs used to describe the viewpoints in those VAGs.
3) The move was done without even consulting the members of this VAG nor the members of any VAGs that use it.