The beginning of Second Life

Second Life (SL) evolved as an idea by founder and former Linden Lab CEO, Philip Rosedale (aka Philip Linden). He envisioned a vast green, continuous landscape, distributed across multiple servers — and went on to build it. While he dreamed of virtual worlds since his childhood, in 1994, Rosedale first thought of connecting computers via the Internet and creating a virtual world. In 1999, he founded Linden Lab (LL). Andrew Linden stated that Linden Lab started as a hardware company geared towards the research and development of

haptics. Although work was underway on a prototype called "The Rig, haptics were subsequently abandoned due to heavy patent concentration. The Linden Lab employees — commonly known as "Lindens" — needed a virtual world to go with their hardware, so in 2001 they started building "LindenWorld", as described in an early news story.

In this early state, LindenWorld wasn't open to the public, was very gun-focused (like a shooter game) and its avatars were made out of prims (called Primitars). This video shows how the world looked back then and how users could interact with it:[1]

LindenWorld was renamed into Second Life: a 3D virtual world with user generated content, where users could interact with each other in realtime.

"Originally, during the Alpha period, the grid was known as Lindenworld. As we were getting ready to launch the Beta, we decided we needed a name that would convey the expansiveness, involvement and complexity we hoped would characterize this world as it grew. We started by debating the merits of a 'place' name versus a 'descriptive' name. We believed a place name would give people a sense of destination, and possibly some added layer of meaning. And we thought a descriptive name would help people understand this new concept of a shared, 3D collaborative space.

"We had a lot of ideas for place names --- one of my favorites was Sansara, which was not only euphonic, but had an interesting meaning in the original Sanskrit, meaning roughly 'ever changing world'. Ultimately, though, we chose to go with a descriptive name, and looked at many derivatives of Terra, Viva, and life. We kept coming back to Life2, and then landed on Second Life as more interesting, more evocative and more what we hoped the world could become as it evolved and grew to be as big as life.

"And that's how it came about!"

The grid consisted of 16 regions, the first one being called Da Boom, which Residents have speculated serves as a symbolic reference to the "Big Bang" conception of this virtual world. Da Boom, as well as the other early region additions were all named after alleyways in San Francisco. This was a nod to Linden Lab's original location on Linden Street. The original San francisco regions, from November of 2002, included Clara, Clyde, Da Boom, Federal, Freelon, Hawthorne, Minna, Natoma, Ritch, Shipley, Stanford, Stillman, Taber, Varney, Welsh, and Zoe. 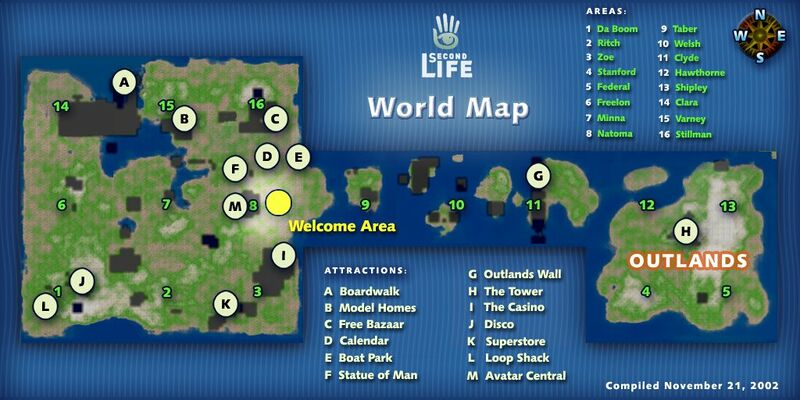 While population and land slowly grew, Linden Lab released Second Life in June 2003. As shocking as it may seem in hindsight, back then, SL had neither a currency nor were Residents able to teleport. It was in the end of 2003 when the Linden Dollar was introduced, and the LindeX currency exchange followed about two years later.[3]

In order to restrict simulator resource usage, a tax system was introduced which required every Resident to pay a weekly fee, depending on the prims they had rezzed inworld. This system was easy to trick by packing all prims into the inventory on payment due day, then re-rezzing them again a day later.[4]

The first Second Life trailer was shown in 2003:

The first Linden official blog post was made by Philip Linden on October 4, 2004 on the first Official Second Life Blog.

The first Telehubs were introduced in Version 1.1.0, with the feature of paying to teleport from one Telehub to another.

While in the beginning, Second Life's business model was primarily based on paid memberships (which later evolved into Premium and Basic accounts), the focus soon shifted to land sales. Residents became able to acquire and rent land, which in turn also became a business model for some entrepreneurial Residents.

In March 2005 Second Life version 1.6 was rolled out bringing with it a number of features including QuickTime media streaming and a standard Second Life building interface.

In late 2005, Linden Lab removed most Telehubs on the grid, opening the way for "direct teleport" from one point to another. Previously, after teleporting, Residents had to fly from a Telehub to their specific destination. The Telehubs were mostly converted into Infohubs, meant to be community gathering spaces and "welcome areas" for new Residents.

On May 1, Resident Anshe Chung was featured on the cover of the U.S. magazine BusinessWorld, reported to be the first person becoming a real-life millionaire due to Second Life business. This story brought great media coverage and pitched the population growth further.

On October 18 at precisely 8:05:45 PST, the 1,000,000th Resident joined Second Life. A special Linden Bear was created to celebrate this milestone. 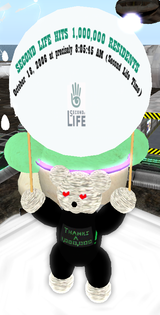 The client was open-sourced in January[5], and Residents were asked to take part in the Architecture Working Group (AWG) to influence its development. The AWG had its first meeting on September 13, 2007.

On April 13, Linden Lab announced the eventual removal of the profile rating system[6], which was used for social reputation but also prone to being abused and misunderstood.

On May 21, the WindLight atmospheric rendering was announced[7] and became part of the main release in Viewer version 1.19.1 on April 2.[8] WindLight improved Second Life's graphics dramatically.

On February 22, Blue Linden announced that there would be a new set of city-style themed regions named Bay City. Bay City opened for viewing on May 8, 2008, and on May 24, 2009, Bay City content was released to Residents as templates for their own creations.

Philip Rosedale announced his stepping down as CEO in mid-March[9], and introduced new CEO Mark D. Kingdon (M Linden) one month later.[10]. Philip continued to serve as Chairman on the Board of Directors.

The first cross-grid teleport to an OpenSim grid was achieved on June 30, announced on July 8, and shortly after on July 31, the Open Grid Public Beta began.[11]

Scripting performance enhancer Mono was launched in August, as part of the 1.24 Server deploy[12]

On January 20, Linden Lab announced that it acquired the SL online marketplaces OnRez and XStreet SL (formerly SL Exchange) in order to merge and integrate them into a web shopping service for virtual goods that would become the Second Life Marketplace.[13]

In August, former VP of Product Tom Hale (T Linden) gave a tour of the new Second Life 2.0 Viewer due to be launched in 2010. Earlier in June 2009, Massively posted a sneak preview.

On February 23, Linden Lab announced the new Second Life Viewer 2.0 Public Beta. Viewer 2 went out of beta and was launched as the main Viewer on March 31.

On July 22, Philip Linden announced that Burning Life will be renamed to BURN 2.0. burn2.org became the website for news and information about this unique community event.

On September 23, Linden Lab announced that Avatars United will be shut down on September 29, 2010. 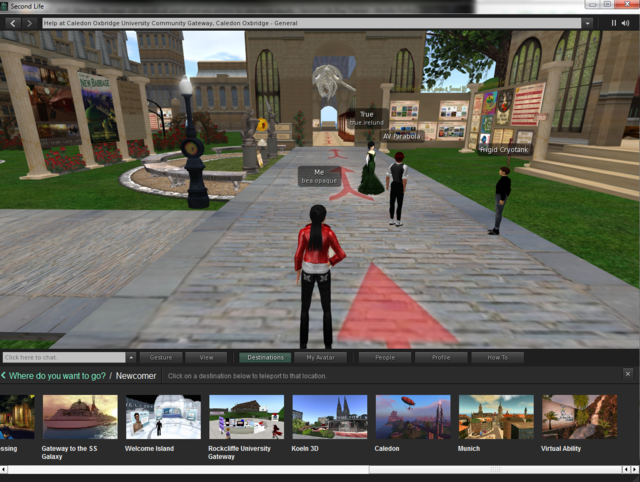 On June 2nd, at 4pm PT Linden Lab performed a load test for Group Chat on the ADITI Beta grid. Many participants attended to test out group chat in Oatmeal and GC Test regions.

On August 23rd, Mesh went gridwide and now all Second Life residents can benefit from the new Mesh technology.

On February 16th, Linden Lab announced details about Pathfinding alpha and that pathfinding experiments were being conducted in Second Life. As of April 19th the Pathfinding Viewer tools are now in beta.

On April 16th, Linden Lab announced that Second Life’s 9th Birthday will now focus on the spotlight on community events around the grid.

In August 2013, Linden Lab was Not supporting Liquid Mesh. They begin looking at how to support this popular hack.

In December 2013, the Lab announced support of Liquid Mesh and the more complete solution Fitted Mesh.

In October, the use of Content Delivery Network begins testing in the Preview Grid.

On 6th February 2015, Linden Lab hosted a snowball fight event with the Second Life community over at Winter Wonderland.

On February 13, 2005, Linden Lab offered "amnesty" for underaged Residents, in case they'd want to be beta testers for the new Teen Second Life (TSL) service. Before this time, Second Life was only open for Residents 18 years and older; being 17 or younger resulted in a ban. The Residents were transferred to TSL, also known as the "Teen Grid" (TG), which was exclusively for teens — with the exception of approved adults like school teachers — and no communication with the Main Grid (MG) was possible. The Teen Grid was only open during Linden-desginated staffing hours. Also, during the first few months of TG Beta, access was restricted to those that were given an invite by an existing Resident or Linden Lab. Teens counted down to 1000 Residents on December 21, 2005.

Beyond the highlights above, further details about Second Life's history can be found in the History, Culture, and SL Birthday categories.