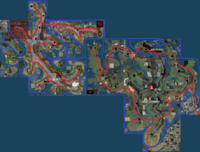 Volcano Subcontinent (or Volcano Sims) is a Subcontinent located in North Sansara. It is one of the most known Geographic regions of the continent and attracts many visitors. It is placed South East from Color Sims and North East from Da Boom.

There are in fact 27 islands, but only 3 of them cover many sims. Two of them are very large and cover more then 70% of entire dryland. Water covers a large surface, close to 40% of land. So, it is easy to divide the subcontinent into East Volcano Island, West Volcano Islands and Small Volcano Islands.

The most common thing is the presence of mountains. Sometimes, they can be very high, with long mountain ranges. In many cases, they are surrounded by coast plains. On the 3 large islands, roads are found close to the coast. The two large islands have peninsulas, while the largest one has rivers. The small islands might be flat or they might look like small mountains and sometimes like extinct volcanos.

A landscape from East Volcano Islands

This is the largest of all islands and it hosts the only active volcano in Sansara. On the map, it looks like an octopus with many long tentacles. In the center of that octopus is Mount G'al, the volcano. It is also the highest peak in Northern Sansara (167 meters). The land is Linden-owned and it does not allow scripts. Beware, health is affected. If you touch the lava, you might die.

Many mountain ranges extend from the volcano in all directions. They are like the backbones of the peninsulas they follow. Altitude decreases fast to 100 meters and then drops to even smaller levels. Usually the mountains have a dark color, confirming their volcanic origin. Close to the end of each peninsula, they end into a highly fertile oceanic plain.

One of the most important feature is the presence of a complex river network. The rivers flow from the volcano to the sea. On their route, they create many waterfalls. There are 9 waterfalls, all on protected land, so feel free to visit them. 5 rivers flow to the ocean, while the 6th one is endorheic (it does not flow into the ocean, it vanishes into the land). Sometimes, behind the waterfalls there are small lakes (see Dams for more info). The rivers are protected land, but presence of waterfalls is a big obstacle for sailors. One of the rivers in East has its own island, the extinct Uli volcano.

Each peninsula ends with an oceanic plain, that continues sometimes along the rivers. Volcanic plains are known for their richness in minerals. Combined with a rainy equatorial weather, the result is a lush vegetation.

A landscape from West Volcano Islands

Declivity is much higher. This is why the road is almost always build on long bridges. Oceanic plains are much smaller in here.

They are found in some distinct places: between East and West Volcano Islands, far in East and far in North. They all look like having a volcanic origin. Some of them are flat, some are made of small mountains and some of them even host volcanic craters, as a trace of their past. Usually, they are not connected by roads, except a few islands in West that are linked by bridges.

One of the most interesting complex is Anveshana in Hiaka sim, in North of East Volcano Island. This is something completely unconventional, relaxing and soul healing.

In many places, buildings are made nearly vertical land. This places them somewhere between a skybox and a land building. Many of them are a prove of fantasy. Shops are present, but much smaller then what is found in other places. There are castles, forests and even a theatre near Quat volcano cone.

East Volcano Island has a road network consisting of a belt ring with smaller routes that enter deeper to the volcano or exit through the peninsulas. Bridges can be seen over the many rivers. The island is linked with bridges to Eastern region of Sansara. West Volcano Islands have their own road network, not connected to the continent. Almost all road length is a suspended bridge, while a large bridge connects the two islands. Since it is in direct contact with a waterway, it is used as a connection with continental water network. The other small islands don't have roads (except for some rare bridges).

All these islands are surrounded by protected waterways, so navigation must be an important way to get across. However, the presence of many waterfalls makes it hard for sailors to enter the wild mountain rivers en route to mount G'al.

The vast road and water network is of great help for visitors. Additional expeditions can be made on slices of abandoned land. Still, many residents allow people to pass over their land. Since summer 2013, in summer 2014 Land With Restricted Access has dramatically increased.