This article is about Map. For Map API, see Map API.
User's Manual

There are several types of maps available in Second Life: 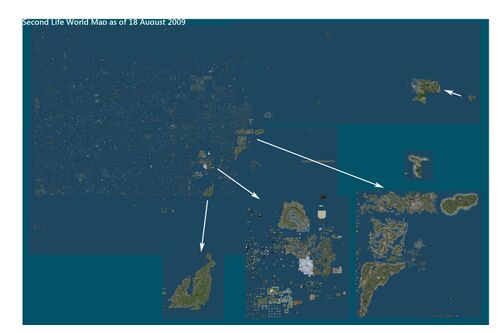 Map Region - The basic unit of the Second Life world is a map region. Map regions are all 256x256 meters in size horizontally by 4096 meters vertical (the build limit, you can fly higher, but not place objects above that).

There are about 29,000 regions in total currently. Each one has to be hosted on a server running copies of the Simulator program (one simulator per region, 4 or more sims per server, 8000 or so servers). Map region is the data, Simulator is the program that runs it, server is the hardware that holds both and talks to you. Often people call regions "Sims", after the program that runs them, but this is not strictly correct.

About 5000 of the regions are directly managed by Linden Lab, Those are referred to as the "Mainland", and are grouped mostly into 7 large continents, and two small ones. The rest are managed by the "Estate Owners" who bought them. An estate can be any number of regions - 1 to hundreds. When it's one or a small number of regions separated by void regions from anyone else, it also also known as a 'private island'.

Void Regions - Not every spot on the map is occupied by a map region. The parts that are not are called Void regions. You cannot travel through the void regions in between actual map regions. There is no server hosting that part of the map, so no way to show you whats there (which is nothing). The only way to travel across void regions is by teleport. That's not a great challenge, since most people travel everywhere by teleport anyway. 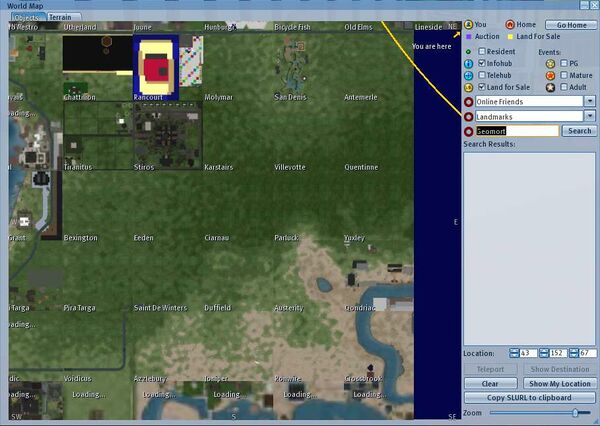 The World Map floating window displays from a few map regions up to the entire grid, depending on Zoom level. You can select what things to see: terrain only, or terrain plus buildings, and then markers for people, events, land for sale, etc. It can be accessed via the bottom toolbar Map button, via top menu View > World Map item, or by pressing Ctrl-M.

The window can be resized using the bottom right corner tab, and the map view can be shifted with click-drag within the map window. Map region names are shown on the bottom left corner of each region. Your current location is shown by a symbol. If you are off the part of the map that is shown, an arrow will indicate your direction. Clicking a location on the map will place a temporary marker. In the 3D view a 'Beacon' (vertical light column) will show the direction to the marker until you get within a few meters of it.

Objects Tab - This tab will show objects placed on the land as well as the underlying terrain. The maps are updated approximately daily, so items will not show instantly.

Terrain Tab - This tab only shows the terrain, without objects.

Go Home - This button will teleport you to your home location. When you are new, this is the infohub you first arrived at after orientation. Afterwards you can set it to another location you own or have permission to set as your home.

Resident - When checked, will show logged in users as dots on the map. Yellow is used for your friends, and green for all others.

Infohub - When checked, shows their location on the map

Telehub - When checked, shows their location on the map (can someone add an explanation of the difference between Info and Telehubs?)

Land for Sale - When checked, land for sale from other users is shown in yellow on the map, and Linden auction parcels are shown in purple. Since the map is only updated daily or so, and parcels can sell instantly, it is not current. See Search > Land Sales for more up to date information.

When you are logged in, the top center of the screen will tell you your current map region (they all have unique names), and the X (east), Y (north), and Z (height) location within the region, in meters.

If you open the Help > About Second Life window, part of it will say something like:

The big numbers are your global map location, Cerura is the region name. sim8062 is the server box hosting the region, and to which your computer is connected with via the internet, followed by its numerical internet address. 1.27.2 is the current version of the server software.

These are the coordinates for the position of a sim (region) on the map. These can be obtained from an in-world device, from Gridsurvey or from a script:

One useful way to get coordinates are by using a script with funcions llGetRegionCorner or llRequestSimulatorData. The Gridsurvey [1] uses coordinates in sims (not in meters). Since a sim is a square of 256 meters, by dividing the coordinates to 256 and using only the integer part of the value, you can get the sim coordinates. Also, on the marketplace there are tools that calculates the coordinates. One useful script is the following one:

The best way to define a Geographival place, both inworld and in real world, is to use the coordinates. The first number is longitude, the last is latitude. Based on these coordinates, there are some interesting informations about the grid map: