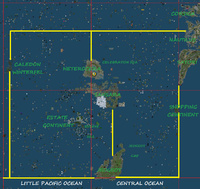 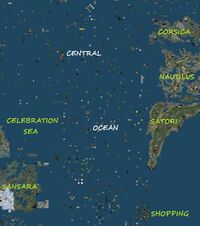 Central Ocean is the grid space between the largest mainland continent. Its name is unofficial (see Oceans), but no better suggestion was made for a name. Its borders are the continents: In West, it is separated by Heterocera, Sansara and Jeogeot. In East, borders are Corsica, Nautilus, Satori and Shopping Continent. 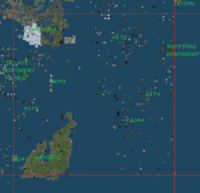 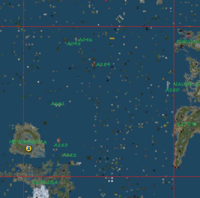 The largest part of this continent is formed of Unassociated Sims. Some of them could be grouped into a Sim Group.

This is a place without sims, just East to Jeogeot.

This is a subdivision of the Central Ocean. It is East to Heterocera and has almost the surface of Heterocera. Usually, there are no islands in that area. The Celebration Sea is used for party and celebrations and the sims created there are deleted after the party. It usually has no private islands. This sea was the place for the SL 10th birthday party in 2013. This sea usually appears as an empty place on the map.

In September 2013, 4 sims appeared on the map, but soon vanished. They had no access to public.

This is the smallest ocean of the grid. It covers 1.66 grid sectors, but it is highly populated. Sims have a smaller tendince to form large groups like in other oceans. Sim density is average to high. Population, however, is high. Islands have very different themes, so you can find 'general', 'moderate' and 'adult' regions. Not all have public access. A big number of estates manage the ocean. However, the most interesting thing is that Central Ocean is one of the 3 oceans with Linden-owned land. The other two are Little Pacific Ocean and Eastern Ocean.

Since this ocean is surrendered by massive continents, Central Ocean has the most clear borders. Also, from a Geographic point of view, an island inside this ocean is more easy to be found by a traveller then an island far away.