A coordinate is a position in 3D space represented in the form of a vector (x, y, z). The current coordinates of a resident's avatar in-world are usually visible at the top of the screen next to the name of the parcel they are on. These coordinates are the position in the sim ("sim-local", not "global"). 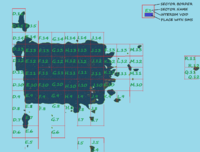 Every object and avatar has coordinates inside its sim, given in meters. They are always in x, y, z format. Every sim is a square of 256/256 meters. Since x is longitude and y is latitude, an object or an avatar placed in the corner of a sim will have the following coordinates:

When you teleport to a new destination using the world map, you can see in the right part of the map sim coordinates where you want to go. Note that if the parcel you want to visit has teleporting predefined spots, you will get there and not to the place you wanted to go. Also, every landmark has the name of the sim and sim coordinates.

The current coordinates of a resident's avatar in-world are usually visible at the top of the screen next to the name of the parcel they are on. These coordinates are the position in the sim ("sim-local", not "global"). Another way to get coordinates is to add a script into a prim and add the prim to your avatar.

To get the position of an object, there are two ways:

Grid position is the position of a sim (or sometimes the position of an avatar) on the world map. It is a vector, so it has 3 values (x, y, z). Usually, Z is not used, since the Altitude is not so important for grid orientation. It can be given in meters, like local position, but it is much more useful to be given in sims. Since a sim has 256 meters, by dividing to 256 the grid coordinates you get the position in sims.

Coordinates for a place on the map are displayed on this wiki in the next format:

All numbers are coordinates in sims, not in meters. See these examples:

This is the best way to define the position of a map structure and comes from the way Gridsurvey gives coordinates for all sims in their database (see below).

The most easy way to get grid coordinates is by using llGetRegionCorner. This function will give you coordinates for the bottom-left (SW) corner of the sim you are inside. To get complete position, you can add the values from llGetPos to add your position inside the sim. A very useful script is the following one:

Another way is by using llRequestSimulatorData, a more difficult function, but with similar results.

No matter the script used, this is the most simple compass that can be made. It will give you the grid coordinates in sims. I placed this script into a prim attached on HUD or sometimes inside my horns or my wings.

At Gridsurvey, coordinates are given in sims. Since a sim is a square of 256 meters, the values in sims are much more easy to understant and work with them. Gridsurvey a non-affiliated site with Linden Lab and a place where you can find the list and coordinates of all sims.

Since Gridsurvey is the largest database available, their system of coordinates is used by Second Life Geography team for all places on the map.

To start working with grid coordinates, the first and most important thing is to fix a simple point of orientation. The best point is the sim Da Boom, the oldest sim on the map, placed in old Sansara. It has the grid coordinates in meters 256000/256000 or in sims (more easy) 1000/1000. It is more easy to keep in mind this round value. This sim is the center of our world and the Geometrical center of the grid. From here, all strctures on the map are defined. To start orientation, take a look at the following data:

Now, once we learned this, it is time to explore even more. All large continents are close to Da Boom. Heterocera is to North, Jeogeot is to South, together with Premium Continents and Estate Continent. To East, you will find Nautilus, Satori, Blake Sea, Corsica, Gaeta 5 and Sharp Continent. To West, there are a lot of smaller places (see List Of Microcontinents And Sim Clusters) and some small private-owned continents (see List Of Continents and Oceans). When you go far away from Da Boom, like the distant Wild West or Zindra continents, coordinates will change more and more.

A grid sector is a part of the map, a square wide of 100 sims. The term is not original, it was invented by Second Life Geography team while editing List Of Microcontinents And Sim Clusters. They are numbered like the squares in a chess game: D8, G11, J13. This proved to be a very good way for orientation on the West part of the map, where no large structures are visible. See Grid Sector for more information.