WindLight was the code name for Second Life's "physically-accurate atmospheric rendering & lighting" project, which was released with the 1.19.1 viewer. 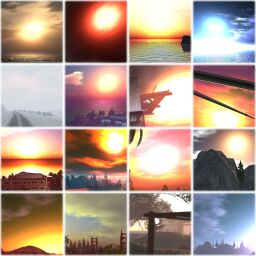 WindLight is a revolutionary atmospheric lighting and rendering system. What does that all mean? Gorgeous new Second Life visuals!!! Watch these demo videos:

This page provides information on the project, as well as useful information that will help us all make sure that WindLight is well-tested before it's integrated into the main Second Life viewer.

Please read the Release Notes for the latest features and bug fixes.

For starters, make sure you read the WindLight Documentation — a lot has changed in this new viewer, and you want to make sure you're up to speed on WindLight's usage, as well as that of the other new components, like high-end water, glow, and the new Graphics Preferences tab.

How can I participate in WindLight testing?

You can participate in WindLight testing with a few easy steps:

A note on features

Many of the new features can really benefit (and some can only be used!) with newer graphics hardware. Not unlike popular games on the market, WindLight's advanced effects require a graphics card with Shader Model 2.0 (DirectX9 shader) support.

We strongly suggest looking at our System Recommendations to ensure you're up-to-date!

Make sure that all of your content, creation creation, and experiences work with this new viewer. Bear in mind that WindLight is client-side only for now- that means nothing is changing on the servers or in any of the data- just what's being shown on your screen. You will notice some aesthetic differences, especially in some of the material properties and lighting. Some of these are intentional (like more dramatic sunsets) and some are still being worked on (like the desaturation of some textures). Have a go at it, and tell us what you think either through the Public Issue Tracker or at our office hours (see below).

Hot stuff we keep getting asked — we're here to help!

Is WindLight more laggy than the main viewer?

Let's be more specific to have a worthwhile answer here, since "lag" can refer to many things. In this case, since WindLight is viewer-side, we're focusing on viewer — also called "client" or "local" because it's on your side, and not our servers — performance.

Long story short, our goal is for the WindLight viewer to have equal or better performance than the main "release" viewer at equivalent settings. There's a lot of code cleanup (which we've wanted to do for ages and finally found an opportunity to!), various optimizations, and some new features to boost speed which made it into this viewer. For example, Avatar Impostors renders distant avatars more "cheaply", increasing your viewer frames-per-second (FPS) in crowd scenes — which translates to "less viewer-side lag".

That being said, we are aware of specific performance slowdown bugs limited to certain hardware, some of which are in our Issue Tracker list — we highly recommend checking that list and reporting new issues not already on there.

Also, keep in mind some of the new graphical beauty, especially water reflections, may incur a significant performance hit depending on your hardware, and this is expected.

Of related interest and featuring WindLight and the Lag Meter, watch the "How to easily boost viewer performance" video tutorial.

At the time of this writing (2007-12-04), no. We're working to support existing supported systems as much as possible while providing extra visual beauty for higher-end systems which meet our System Recommendations. See the System Requirements/Recommendations page for further details. Do note that we did update that page to list an expanded range of supported cards, as well as Windows Vista compatibility.

If you have a lower-end system, you can set WindLight's Edit menu > Preferences > Graphics tab to "Low" or "Mid" and as emphasized above, your performance shouldn't be less, and may even be better.

What are you doing about WindLight looking "wrong"?

First, it's important to understand that aesthetic concerns fall into several categories, so any discussion involving them should be specific. We've also started VWR-3463 to track your valuable feedback.

Second, education is essential! Many concerns & complaints we get are a result of not knowing how to change WindLight settings to make things look the way you want! There've already been some great Resident tips about this, so please be sure to familiarize yourself with the powerful-yet-easy-to-use Environmental Editor (found under World menu > Environment Settings), and read our documentation.

The following isn't all-inclusive, but:

[UPDATE @ 2008-02-08] We've continued to tweak the day cycle. We've reached a point where almost no textures (noticeably light ones like sand and snow) get washed out at midday, save for the absolute very lightest that are near-white. As for the longtime local lighting strength concerns in VWR-3171, we're making them stronger, and in the next update, you'll be able to boost them back up to 100% brightness via a debug setting, RenderSunDynamicRange, if you want. This should serve the purposes of both casual and specialized usage.

Remember that historically, avatars were treated differently than their surroundings, hence why they tended to look "flatter" compared to WindLight. WindLight, of course, has a more unified, cohesive, and realistic (or unrealistic if you want) lighting model with an expanded dynamic range, so there's understandably inevitable change which will likely lead to creators making avatars slightly brighter over time. This isn't the first time a new feature has introduced a gradual shift, but we've certainly taken a lot into consideration and explored many possibilities in order to retain the "essence" of existing content while enabling it to be richer through WindLight.

[UPDATE @ 2008-01-10] We still aren't happy with the "washed-out/too bright textures at noon" and similar situations. We understand your concerns, and we're going to keep grinding on this so things are expectedly brighter, but not harshly (e.g., obliterated detail on snowy regions) so.

[UPDATE @ 2008-01-03] The following have been substantially improved. See this for an indepth explanation. WindLight is nearing Release Candidate status; we welcome continued issue discussion at our Office Hours.

For more of our direct responses, read our office hours transcripts.

What's already been fixed in WindLight?

How do I turn off classic (old-skool) clouds?

Why are avatars so blocky?

If you think avatars look like 16-bit Nintendo characters, that's because Avatar Impostors, which boosts performance by rendering distant avatars like sprites, is on. You can either:

OR if you want to keep it on but increase the distance at which impostors takes effect, minimizing the blockyness, then:

You can easily find a crowd, zoom your camera, and adjust this to taste.

How do I take awesome snapshots with WindLight?

You may've seen Flickr, Snapzilla, or another site where WindLight beauty abounds. Try leaving a gracious comment on snapshots you really enjoy in hopes of the photographer getting back to you!

What's the future of WindLight?

WindLight is currently viewer-side only, which means, among other things, that when you change sky settings, only you will see those changes. Longer-term, WindLight will replace server-side functionality, meaning:

So, when will this happen? Tentatively, near-mid 2008. We don't have a specific date yet, as it depends on successfully fixing the bugs in the current WindLight-powered main viewer first and doing other work which preempts the server-side phase, but we promise to announce more news as it becomes available.

When will we get scriptable glow?

Are you ever going to add [INSERT COOL FEATURE HERE]?

We have a lot of exciting plans for a progressively better-looking and faster-performing Second Life that depends on our present work — the first phase of integrating WindLight into the main viewer — to be done. Some of the most popular feature requests we've heard we hope to do eventually someday.

If you're anxious and think that sounds too vague, that's because we'd rather not promise vaporware, and we'll give you specific details of implementation when work on each project is actually underway — until then, we welcome the inspiration that comes from your suggestions because it helps shape our future!

In them meantime, we encourage you to put your feature requests on the public Issue Tracker so we can keep easier track of 'em.

How do I stay "In the loop" with WindLight? 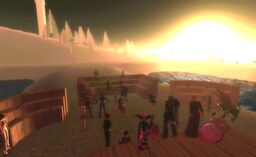 Check these out if you're curious or if you missed out!

What's our community doing with WindLight?